It’s AAWC #3!! I’m practically dragging team meadow to victory (haha) and needed to write a story for these prompts. Again, all three prompts and boatloads of pictures.

Emily. 13 (I changed her age, it wouldn’t have worked for the story). The hot pink of her outfit stood out from her pale skin.

Peter. 14. His brown hair lopped over his forehead and his shirt matched the deep blue in his eyes.

Emily didn’t tell anyone but she liked the squire’s son Peter. He understood her wild imagination. He didn’t treat her like a child. Everyone else -her father, her brothers, the servants, even- considered her childish and too imaginitive. Not Peter, though.

Emily couldn’t have been more different from Peter. She was a princess, surrounded by riches. He was a farm boy, had no more than a few shillings. She lived in a huge castle surrounded by walls. He lived in a tiny, crumbling shack, only protectected by meadow flowers. Emily and Peter didn’t let these differences separate them, though. Instead, it only made their friendship stronger.

It was March, a sunny spring morning. Warmer than a usual March Sunday, but still a hint of winter’s frosty fingers creeping through the breeze. Peter had run out of his house at sunrise, breathing in the fresh air. Birds twittered, branches rustled with the movements of rabbits and foxes. All seemed right with the world. Peter ran towards the castle where Emily would just not be climbing her way out of the window, taking care not to wake the maids or guards.

Peter found their meeting place, an old log, and sat like an impatient child, fiddling with a rock that had crumbled from the ancient walls.

“Peter!” the boy heard a voice calling from inside the walls. Quiet, but somehow heard over the thick, monstrous barriers.

“Emily! I’m right here!” Peter waved, even though Emily couldn’t see him. He saw a blonde headed peak over the castle walls. Next, stunning blue eyes contrasting with pale white skin. Her dress shone in a pink brilliance. In a moment, all of her had jumped over the wall and fallen into Peter’s arms.

“If you ever dropped me, I’d be dead,” Emily said with a giggle, righting herself. She ran her fingers through her shiny blonde hair, smiling up at the radiant sun. “Such a beautiful morning! The sun, the bird, the trees-,”

“Me? I’m pretty beautiful!” Peter interrupted playfully. He grabbed her hand and pulled her towards the forest.  “Come on, let’s go check our traps,” he said.

Emily was a girl, a princess, really. She shouldn’t have been going out at this time to look at traps. That was one of the reasons Emily loved Peter. He didn’t consider her unable to open the traps or even string a bow and shoot. She was now quite skilled at hunting, though she would probably never use it.

The sun shone down through the green canopy of trees. The dewy grass slowly dried up as the heat soon blared throughout the kingdom. Peter pushed his brown hair out of his face, shading his eyes. “One more trap to check,” he proclaimed. The day had been as successful as ever. Which means they hadn’t gotten anything. They never had. The only trap left was a huge one, meant for grizzly bears. Nothing had ever been caught, and it almost wasn’t worth braving the heat to go check it.

“Peter, is there really any use? We both know that there isn’t going to be anything,” Emily reasoned, wiping sweat away with a handkerchief.

“What if today was the day? What if we finally got something?” Peter said jokingly.

“Yes, sure, we get a grizzly bear,” Emily said, coming out into the meadow where the trap was. “If there is one, I’ll name him Jakey. I’ll feed him tarts during teas. I’ll give him a bat-,” Emily stopped, midsentence. Standing in the midst of flowers, held back by a trap, was a bear. A real, live grizzly bear.

“I don’t know if he likes baths.” Peter said. He is just a flabbergasted as me that we’ve act caught something. He steps closer. The bear, in fear and pain, let’s out a deafening roar. His mouth opens wide enough to fit two carriages. The noise is deafening, like a thousand birds all screeching at the same time. 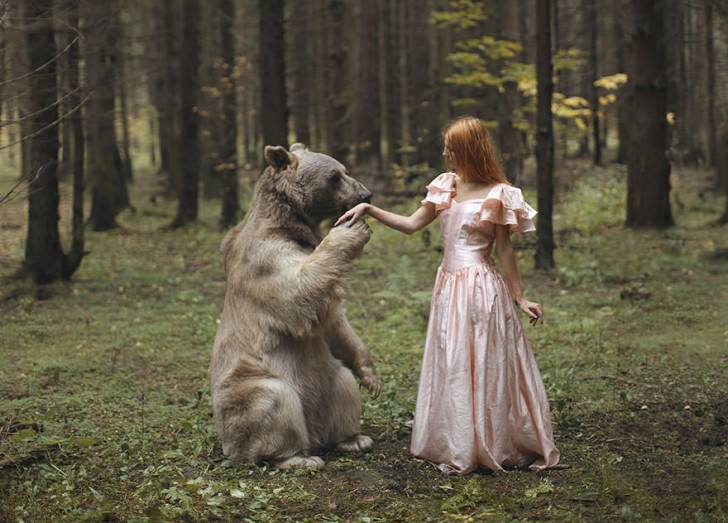 The bear, just as surprised as Emily herself, stopped his uproar (haha I crack myself up) for a moment. He stared at Emily. He leaned down, his breath steaming on her face. He opened his mouth. Emily cowered in fear. The bear began to lick her. Great big licks of slobbery bear breath. But not teeth. Thank God no teeth.

Peter stared, jaw dropped, at the scene unfolding before him. Something inside of him told him to open the elbear trap. Using all of his strength, he jeaved open the two jaws. Angry red marks of blood marred the bears huge feet. The bear gave a little noise of thanks and stepped away.

“PETER,” a voice, a man’s voice, screamed from somewhere.

“My dad,” Peter whispered. Something in him knew that something was wrong. “Emily, we’ve got to go.”

“We can’t,” Peter was almost crying with fear.

“No, the bear. He’s faster, we can ride on him! Just get on top of him, I think he knows where to go,” Emily told Peter, jumping up on to the bears large back. The bear was now on all fours. Peter, seeing no other option, jumped on the bear. With an almost supernatural speed, they were running through the forest, back to Peter’s home.

They finally arrived, fearful of the dense quiet, but also relieved that there was no more screaming. Emily and Peter dismounted. Emily hadn’t realized it, but she was clutching her bow to her chest. Her fingers were whiter than usual. Her hair didn’t shine as much.

Peter grabbed Emily’s empty hand, trying to comfort himself as well as Emily. Emily leaned into him, smelling his woodsy scent.

“We can do this,” Peter said, sounding uncertain.

“Yes,” Emily said, squeezing his hand.
Together, they opened the door to Peter’s house.

Inside was a man, rough and cruel looking. He had a scruffy beard and unkept black hair.

“What are you doing here?” the man asked in a voice as scruffy as his beard.

“This is my house.” Peter said defiantly.

“Not anymore.” the man said with gruesome smile.

“Says who?” Emily said, trying to be brave. She helped up her crossbow and aimed it at one of the man’s accomplices. The man gave a laugh, a putrid smell of cigars filling the room. Emily, a little hesitant, strung a bow. The man gufawwed. Emily, trying not to think, shot the arrow. The man fell to the floor, hopefully only unconscious. The room went quiet. The other accomplices cowered in fear. One even ran out the back door, deserting his comrades. Emily took aim at the ringleader, the one who had first spoken.

“Umm, Emily?” Peter sounded uncertain, “are you positive you want to do this?”

In response, Emily fired. The man dropped, undoubtedly dead. Then it was over. The accomplices ran out if the back door, some yelling words that couldn’t be understood. A roar, undoubtedly a bears, followed. Emily gave quiet consent to the bear running away and freeing itself. It probably didn’t like baths anyway.

“You were protecting yourself, Emily. You made the right choice,” Peter said, opening a closet door. He pulled his father, bound and gagged, out of the closet, undoing his bonds. “I’m proud of you,” and there, Peter stood up and kissed Emily for the first time.
The End.

I had so much fun writing that, and am so glad it didn’t delete itself!! Whew, that story was long! Now, the pictures!

Obviously i didnt make this, so you dont HAVE to count it as points, bur it just illustrated so well!!

That’s all! I’m gonna go back into hiatus mode for a while!

My entry! It was cropped!